Exploring a new country is a mix of excitement and anxiety, and most of the time, you can’t distinguish between the two. However, Costa Rica made it pretty easy to relax and just enjoy the ride. Costa Rica has no shortage of things to do between the range of volcanoes, labyrinth of rivers, and blanketing rain forests crawling with creatures, but, I found my niche on the Pacific coast, surrounded by palm trees and few too many iguanas for my taste – Manuel Antonio.

I chose the latter.

Before visiting Manuel Antonio, I had only visited Florida beaches. Don’t get me wrong, Florida is beautiful,

but Costa Rica was it’s own kind of paradise.

Vendors walked up and down the beach selling a variety of things like fresh fruit, hand-made crafts from the locals, and cold drinks. Nothing seemed too different until a man rolled a cart by with coconuts. Some could say I used to live under a rock, but I had never seen one before. But, hey, in my defense, it’s not like we grow coconuts in our yards back home in Arkansas. So, with that being said, I had to indulge in this little treat. The man pulled out a large knife, started chopping, handed me a straw and took my 500 Colones (around one dollar).

Those are the words that come to mind when I recall the taste. It was so delicious I convinced all of my friends to get one as well.

We were coconuts for coconuts. 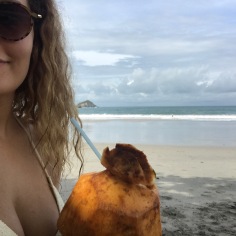 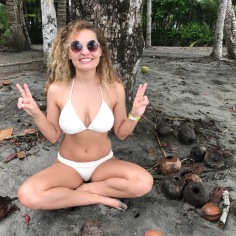 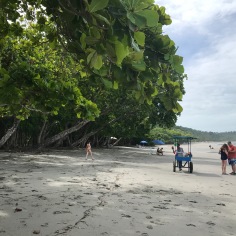 When most people thing of foreign beaches, money is probably the first to come to mind- at least for me. Fortunately, we found a lively hostel named Selina for around twenty dollars a night. If you can manage sharing a room with ten other people, then a hostel is the way to go. 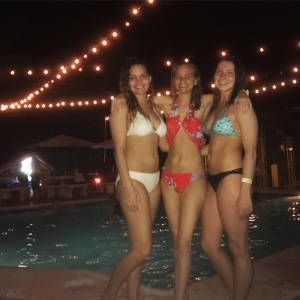 The hostel included two out-door pools under a string of lights, a bar, dance floor and restaurant – all with a view of the waves.  We were a short walk from the beach with an assortment of restaurants on the way.

When we arrived to the hostel, all of the employees spoke English, so it was a quick and easy to check-in. We were all given wrist bands because after nine the security starts monitoring who went to the living areas, and anyone without the wristband was not allowed into the sleep quarters. There was a DJ on sight, plenty of space for people to dance, swim or just relax with a cerveza next to the pool.  It was easily the best twenty dollars spent that weekend. 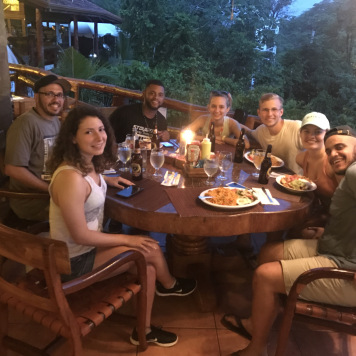 Growing up in Arkansas, I’m not a stranger to seeing animals in the wild; however, I was very surprised by the number of creatures in the trees, walking about freely, or sunbathing next my chair at the pool.

I had the pleasure of seeing a three-toed sloth, cozy in the canopy doing exactly as anyone would expect – sleeping. On the other hand, the place was crawling ( literally ) with iguanas. On the roof, in the grass, in the trees, and next to the pool. They didn’t seemed very comfortable around people, although I can’t say the feeling was mutual.

Manuel Antonio was one of the highlights of my summer in Central America. Thanks to the fresh produce, friends, and even the little critters, it will be a hard experience to beat.