Probably most known for being the home of the Steelers.

For me, it was the first ‘big city’ I ever went to.

I was eighteen, fresh out of high school and ready for adventure. So, when your friends ask you if you want to go on a fifteen hour road-trip to Pennsylvania, what do you do? You go.

Five people. One Chevy Malibu. Fifteen hours. Yikes. I wish I could say it wasn’t as bad as it sounds, but, it was. I had only ever been in the car that long when we went on family vacations to Florida. You find how well you know someone – or don’t – when you spend a couple hours with them on the road.

Thankfully, we all survived that nightmare.

When we arrived to Pennsylvania, the landscape was very similar to Arkansas – rolling hills, green everywhere, nothing too exciting to see. I was ready to see some bridges, skyscrapers, and taxis, not more trees. Little did I know, it all awaited on the other side of the Fort Pitt tunnel.

The Fort Pitt tunnel seemed to last a lifetime. The light at the end slowly grew larger and larger but not revealing the magnificence that awaited. When we finally arrived at the end of the tunnel, it was like the sky opened up with light, our eyes adjusted and the entire car began yelling profanities at just how incredible it was.

There were bridges. Everywhere. We were crossing over a huge river, driving directly towards downtown which consisted of a jungle of skyscrapers. It was like I was dreaming. All I had ever wanted was to see a city like that. I had my sights on New York, but that city was mesmerizing.

We navigated around the city, probably making a few wrong turns until we finally arrived to our destination in Lawrenceville. As we drop down the main strip of Lawrenceville, it was like something I had seen in movies. All sorts of boutiques, restaurants, hair parlors just lined up down the street. And there were people walking.

I was so eager to get to the house, unpack our things and go explore. When we arrived to our street, there were cars parallel parked on each side, followed but a row of townhouses on each side of the street. The only thing I could think of that moment was “How have I been living in Arkansas my entire life?”

We entered the house that belonged to my best friend’s brother. I had never met him before so I was nervous and excited all at once. Immediately after opening the front door, we had to walk up a steep, narrow staircase – I loved it, already. We reached the top only two see a small, yet cute kitchen. We then turned the corner to the living room although it wasn’t like any living room I had ever been in. The walls were lined with books, paintings, plants – all things that I adored. I had only seen that type of decor in magazines so I almost had to pinch myself to make sure I wasn’t delusional from lack of sleep.

There I was, in a huge city, staying in a home I had only dreamed of and I was in already in love. And all of these feelings were happening before I even met the lovely host and owner of this home – Sven (who is now one of my closest and most treasured of friends). Oh, Sven. Poor guy had just woken up from a nap when the five of us barged into his room.

You know how sometimes you meet someone and you’re like ‘damn, I want to be his friend‘? Well that was me. I was hanging off of every word he said. I wanted to know the secret of how he escaped Arkansas, how he found the wonderful place, and what was he going to do with all of these opportunities just swirling around him like leaves in the autumn wind. I just wanted to live that life, too. I had only been in the city for forty-five minutes and I had already began making plans for the future and debated on whether or not I was returning to Arkansas at the end of the week at least twice in my mind.

As the week went on, I was introduced to so many beautiful people. I had never met anyone who thought the way I did and I felt so at home being surrounded by such open-minded and adventurous people. Pittsburgh is where I learned I could be myself and that it was okay to have a mind of my own and just be different. It saved my life from trying to live the cookie-cutter life so many others I knew were doing.

Being so high on life up at the ‘Burgh, I somehow got convinced to get a tattoo. Remember earlier when I said I was eighteen and ready for adventure? I meant it. 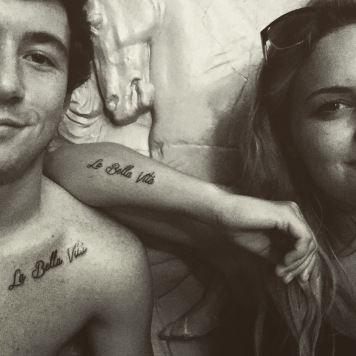 Processed with VSCOcam with m3 preset

The five of us just spontaneously decided to get tattoos. And it was one of the best decisions I have ever made. The tattoo that I chose says “La Bella Vita.” It is Italian for “The Good Life,” and if you have read my other blogs, you know what a tattoo in Italian means to me. (If you haven’t, go check them out!) For me, I chose those words to remind myself that I really do live a good life. Of course, not every moment is perfect, but I have the power to change my life if I am not happy. I wanted to be reminded to be thankful for everything that has led me to where I was but to not lose sight of the life I wanted. (My best friend also got the same tattoo as I did, so I loved knowing that we would always be connected to each other in some way).

This tattoo marked a turning point in my life. I was changing. I knew what kind of person I wanted to become as I could see it being portrayed in all of the people around me. The tattoo signified a new ‘skin’ for me. It has been two years since that crazy ink stained my skin, and still yet, every time I am asked about my tattoo, I am reminded of that amazing city, those special moments with people who pulled me out of my shell, and just how amazing my life really is.

Pittsburgh is full of stunning views and is so rich in American history you can literally see the evolution of the United States through the car window as you pass by on the free-way. But aside from all of the awesome things the city has to offer, it will always hold a special place in my heart for changing my life, giving me unforgettable adventures, and overflowing my heart with so much joy and inspiration to conquer the world.

Are we there yet?