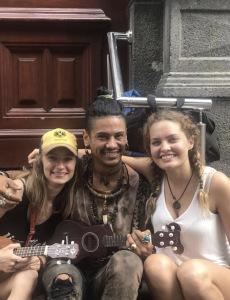 When I decided to bring my ukulele on my trip to Costa Rica this summer, I had no idea the impact it would have on me. I simply thought that I was bringing it in case I had some extra time to practice or maybe I would get bored at the airport and need something to do.

To my surprise, my ukulele did a lot more than that for me. It helped me connect to beautiful people in a way that only musicians connect. I can hardly call myself a musician, but music has a way of speaking to the soul of those who listen.

Music has the power to change someone’s entire life, give them peace, motivation or a sense of purpose. It can make you fall in love or mend a heartache.

I was very lucky that my best friend, who is actually a musician, was with me on that crazy adventure. From long, crowded bus rides from one city to the next, to playing music in the streets and malls for complete strangers, and even giving lessons to the friends that we met, it wouldn’t have had nearly as fun without her crazy self by my side.

I’m going to share just a few of the moments we experienced in that enchanted place, although there were too many to condense into one short blog.

One morning at the Artisan’s Market in San Jose, Gabrielle and I were sitting at a table. She was eating breakfast while I was practicing some songs on my uke. A little girl, maybe three years old, came walking by. She was completely awe-struck by this tiny

instrument that looked more suited for her hands than mine. Her parents sat down at the table across from us and asked us to play. We only knew a few songs but we gave it our best shot.

The little girl’s mom began videoing us for her Snapchat (I had never had anyone want to video my singing before so it was a very exciting moment). After we sang a few songs, the little girl came over and started touching my Ukulele. I picked her up and sat her down next to me, positioned the uke in her tiny hands and let her play.

The joy in that little girl’s face told me that I was exactly where I was supposed to be in that moment.

Sometimes we get caught up in ‘life’ that we forget to just slow down and appreciate beautiful moments like this.

After the photo above was taken, I then took a picture of the little girl and her mother with my Polaroid camera for them to keep. I hope her mother tells her about this moment one day, and maybe she will want to play the Ukulele, too.

Have you ever played music in the streets with hippies that you just met? No? Well, let me tell you, it’s awesome.

One guitar with a broken string, two ukuleles, an egg shaker and plastic cup. That’s right. a plastic cup.

It all started with a hippie named ‘Funky.’ The name suited him. He was a mad man – in the best way. He was a free spirit to every extent of its meaning, and a kind soul. It didn’t take much for him to draw the attention of two girls adventuring through the wonderful city of San Jose to sit down and start talking to him. Nor did he have any problems attracting two other ‘musicians’ (I say that loosely because I’m not even sure where they came from) and a large crowd of spectators around us. People were taking pictures, videos, and some even asked if they could take pictures with us.

After the five minutes of fame passed, excitement was surging through our veins, and the excitement just kept coming. 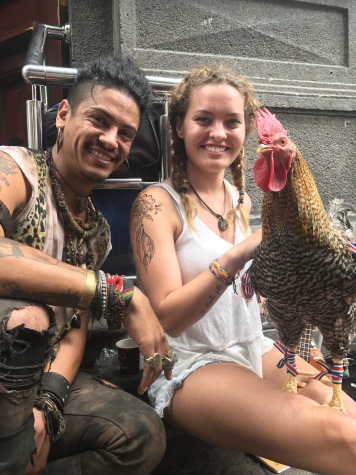 Meet Paquito. Apparently he didn’t want to miss the show.

Yes, that’s a real rooster, and yes, I was a lot more afraid of it that I looked.

Aside from the insane encounters with hippies and chickens, there were times when the ukuleles connected us to people on a more personal level.

It’s amazing how when words fail you, music is there to fill the silence.

Costa Rica for a few short weeks left the language barrier a little smaller but still very much present. But, when the Ukes were out, words weren’t needed.

Every single person that held the ukuleles had a smile on their face. I don’t know if it was because it was so small and cute, or if it was because there is something so surreal about speaking the language of the world with your fingertips.

Either way,  we shared our little beauties with everyone who wanted to see them.

Music bring[s] people together. It allows us to experience the same emotions. People everywhere are the same in heart and spirit. No matter what language we speak, what color we are, the form of our politics or the expression of our love and our faith, music proves: We are the same.   – John Denver

I left my Uke there in Costa Rica. Not because I forgot it, and not because I didn’t have room in my suitcase (although it would have been a tight squeeze), but I left it there with hopes that it would impact the life of the next person who played it in the same way it impacted mine – with countless smiles, laughs, and memories.

Thank you for listening, Costa Rica.

It was a trip of a lifetime.

There was an error retrieving images from Instagram. An attempt will be remade in a few minutes.

Are we there yet?

About travelling and how to be completely unprepared for it.